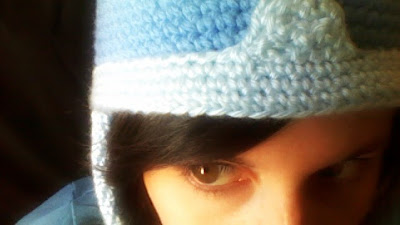 When I was in 5th grade I was in love with a show called Digimon. I watched every episode religiously, I had the official digivice, I bought notebooks, I wrote my own guidebooks, I was out of control.

My classmates at school were not fans and after a few weeks of teasing I began to keep my fandom a secret. I still brought my digimon notebook to school but I’d keep it hidden in my backpack. I would still write stories about it for my assignments but I would change the names so no one knew.

Halloween came around and I decided to dress up as Sora (one of the main characters). I think I secretly thought that since the show was SO amazing that many of my classmates were probably closet fans as well and just pretended to hate it. I believed if I came to school in the most  perfect Digimon costume everyone would be like, “Is that Sora?? That’s incredible! You’re cool now and we are going to have Digimon parties everyday!”

For weeks I worked to make the best Digimon costume the world has ever seen. Sora might as well have stepped out of the TV and into the elementary school. I was sure people wouldn't even recognize me!

For reference this is the character I so wanted to emulate. Note the yellow vest, red gloves and specifically the blue hat. 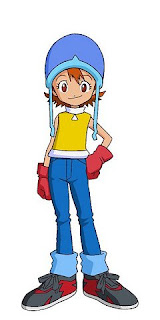 Most of the costume was easy to acquire and I even got my hair cut to flip out at the sides. 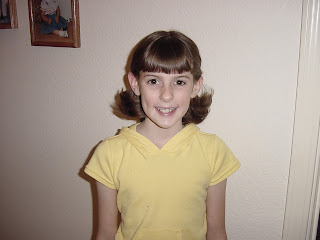 The helmet however, gave me issues. No one sells bike helmets in that shape… in fact no one sold helmets of any kind in that shape. I knew I couldn't be Sora without the helmet so I set out to make it myself. My first attempt was paper mache but I had never done it before and I didn't know how. I also had a problem as a child of ignoring tutorials/instructions because I considered them “cheating.” (No joke, I wouldn't even use recipes. I made spaghetti once by letting noodles sit in warm water for a few hours and then pouring V8 juice over them. I made my family eat it.) When I finished it was the lumpiest, ugliest DIY you could imagine. I still remained hopeful that it would smooth out once it dried.

I waited patiently until October 30th before I realized it had failed. I had to have the hat to be Sora! I started grasping at anything and I found my last resort in Tupperware. I pulled out one of mom’s plastic bowls, sprayed it with blue spray paint and wrapped the bottom in a sky blue ribbon. I did it!

I went to school the next day dressed as some obscure character no one had ever heard of wearing a blue bowl on my head. Instead of my expected reaction of awe and secret fandoms revealed, EVERYONE asked me, “Uh… why do you have a bowl on your head?” At which point I realized I was too embarrassed to admit I was from Digimon and told everyone “I don’t know, I just do.” I made no friends that year. 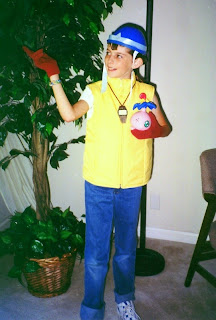 This is me on October 31, 2000 dressed as Sora Takenouchi from Digimon Adventure 01.

Since then I refer to that as the "bowl incident" and have felt all sorts of shame. (I didn’t learn my lesson though, I went as obscure characters almost every year…. When I was Sheena from Tales of Symphonia people asked if I was a power ranger).

There have been many, many times I’ve thought to myself, “I wish I knew how to crochet back then.” This is one of those times. If I had to go as Sora I could have at least been a decent one. I would never have been known as bowl girl... never heard things like, "Hey remember the time you wore a bowl on your head? That was so weird!"

So here it is - this pattern atones for the horrible debacle of Halloween 2000. This is Sora’s hat! I can live on in peace now. 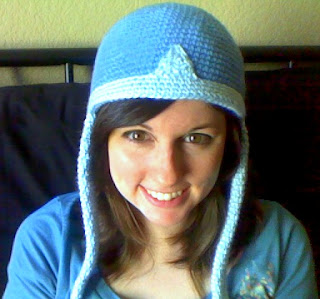 Flip the light blue part up so it is around the brim. Sew the triangle on the front. Now using a whip stitch to secure the light blue edge onto the
hat. Now sew the side straps onto the bottom sides. Weave in ends 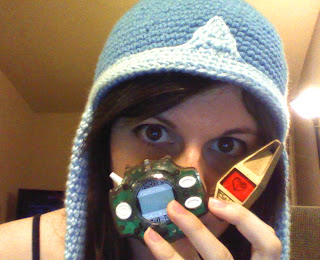 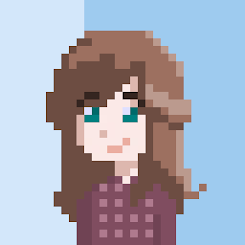